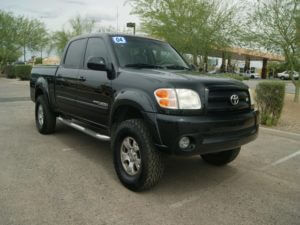 When it debuted at the turn of the 21st century, the Toyota Tundra was considered by many people to be the first import full-size pickup truck to truly go head to head against the trucks from the domestic brands. In the Tundra's favor were a refined V8 engine and Toyota's reputation for reliability and durability. This Tundra, however, found more of an audience with recreational pickup buyers than with hard-core users.

Later Toyota Tundras are significantly bigger and more capable. When properly equipped, Toyota's full-size truck matches the tow ratings of its American-brand competition. Inside, the Tundra has spacious, comfortable accommodations for passengers and mostly simple controls. In a bid to expand the Tundra's appeal, Toyota has offered more specialized equipment packages, including a TRD Pro off-road version and the ranch-themed luxury versions. 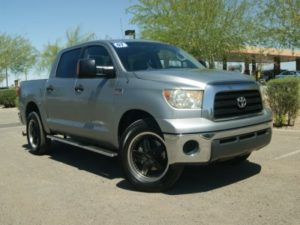 Here at liberty cars and trucks we keep a wide selection of used toyota trucks, Especially the very tough and dependable toyota tundras